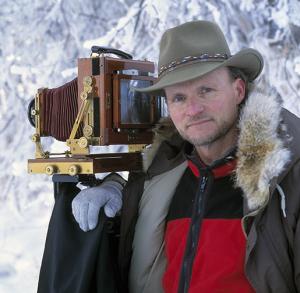 Image of Leland Howard with Wisner 4x5 view camera. Even though a camera is just the tool used in this trade, the question most often asked is "what camera do you use"? So here goes, I've used a lot of different equipment over the years and one of my favorites was a Wisner 4x5 Technical Field. I lugged it around coupled with a wooden Reis tripod for about 15 years. When Hasselblad introduced their medium format D series I made the switch but I don't care much if someone uses an 11x14 view camera or an iPhone, what's important to me is the work. I just choose equipment to fit my style. 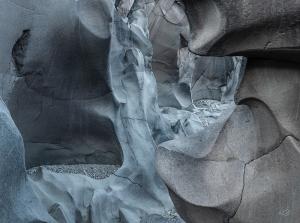 Black Magic Canyon in south central Idaho. Sad to say some of the formations are now showing signs of graffiti and vandalism. I wonder sometimes if it would have been better to not show any photographs of this unique and amazing place but for the most part - as usual, awareness wins that debate for obvious reasons.
I spent more time in a deeper section during this last trip and became aware of something I hadn't fully realized before. Although the dominant colors in the carved basalt are of course black, gloss black and gray, light reflected off adjacent rock reveals different color hues ranging from light blue, to tan and sometimes varying shades of purple. It would take a much better writer than I to adequately describe the color changes depending on the angles of reflected light in this canyon that is an exquisite example of art in nature.
Over a period of about ten thousand years, the Big Wood River carved these sculpted forms in the hard basalt. So, someone in this time comes along and chisels their name and some verbal garbage - I would suggest not doing that.
Very Important information if you plan a visit: The water is now controlled by the Big Wood Canal Co. in Shoshone and the canyon is full during the irrigation season so early spring and fall are clearly the best times to visit. If you plan a visit you must call the canal company first. If you are in the canyon when they release water from the dam, it would be like a southwest flash flood in a slot canyon and there would no escaping. The number to call is 1-208-886-233. 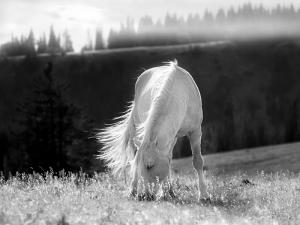 Montana, east, The famous wild horse, known as Cloud in the Pryor Mountains. This wild horse, given the name Cloud as a newborn colt by Ginger Kathrens when she did the PBS Nature series, has become kind of famous and his likeness is painted on the walls of buildings in the small towns beneath the Pryor Mountains. He was still an impressive and strong horse in 2012 when I made this image of him. He got very comfortable with my presence in a short time, which surprised me a little. I suspect the legend will live on for quite some time. 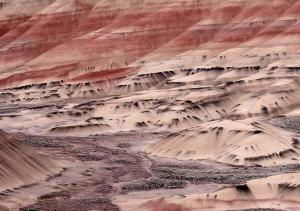 Oregon, north-central, Geological formations aptly referred to as the Painted Hills in the John Day National Monument area. Years ago when I first started displaying images from here, the colors, shapes and patterns seemed unbelievable to some and were at times dismissed as unreal. As the area became more popular, that kind of skepticism has been subdued. Weather conditions, moisture content and of course time of day can dramatically change the tones, color density and hues. This phenomenon can also lead to comments like “I’ve been there and it doesn’t look like that”. The terminology that I like to use is art in nature and in this case, the look is related to geological eras including floodplain deposits from when this region of Oregon was warm and humid. Laterite soil (deposits rich in iron and aluminum) account for the reds, whereas the blacks are identified as lignite - a low-grade coal formed by the compression of partially decayed vegetation (Peat). The other more typical grey coloring is shale, mudstone or siltstone. Then there are the mixtures that vary from gold to yellow and may even appear a light blue under the right lighting conditions. Overall it was a unique set of events that created this magnificent place. 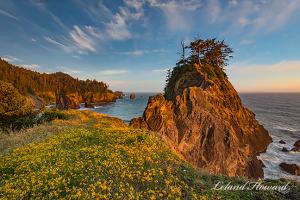 Despite possible cultural pressures, one shouldn't be apologetic when enjoying natural beauty as subject matter in an art form. It is an island of respite in a world focused on tragedy. Beauty and nature offer the kind of hope and uplift we need for balance and health. 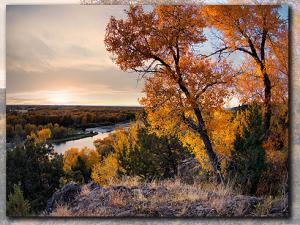 Autumn view from the Cress Creek Preserve. Idaho is my home state and sometimes I can receive a little bereavement from residents when I travel and work in other states or regions. I think for the most part though people do understand what it takes to make a living at this and then of course there is the added benefits of exploration and adventurous travel. Still, it's always a pleasure to represent Idaho when I can, after all it is home and without question, a great place to live.

Capturing the grandeur of a large landscape scene can be one of the most difficult challenges. Far to often the magnificence is lost when rendered on a small two dimensional plane. A lifetime is spent in search of ideal conditions along with beautiful light that might, among other things, create the illusion of a three dimensional space. This clearing storm in Zion National Park of southern Utah was just such an opportunity. I refer to it sometimes as the attempt to do a landscape justice. When the conditions are right, everything has to be done correctly in what can be a very short period of time. Over the decades I've missed far more opportunities than I've been successful at. It's the nature of the game and the learning process. 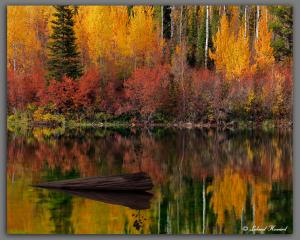 Recently, while giving a talk, I was ask: "What makes your photography better than others"?. The question caught me a bit off guard because I don't think in terms of being better than others. For me its about sharing a vision and maybe along the way if I could raise awareness, that would be a positive contribution. So I just do what I can and it's gratifying to learn when I have helped someone gain a better appreciation of our brief moment in the sun. 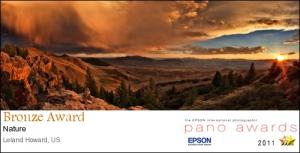 I look for areas that have different and far less photographed perspectives such as this view of the cliffs of Zion National Park from the BLM land just adjacent. It pays off sometimes with unique work and another advantage is not having to fight the crowds.